A (brief) history of kitchen design

The origins of the kitchen derive from the ancestral firepit in the ground. For centuries, though brought inside from caves to Great Halls, the premise of cooking remained much the same. It is predominantly the last century in which domestic kitchens have evolved and progressed to the concept we know today...

It was the production of the Hoosier Manufacturing Co. cabinet that marks the start of kitchens as we know them, pinpointing the invention of modern-day cabinets.

Oak cabinets formed the foundation of the scheme with marble worktops and simplistic colour schemes. Butchers blocks and butler’s pantries are common. Though gas stoves were patented a whole decade earlier (by British Inventor James Sharp in 1826), it wasn’t until the 1920s that these started to be introduced into domestic kitchens. The invention of the domestic gas stove was pivotal to the progress of the kitchen as we know it. In 1923, the first self-containing white enamel refrigerator unit was brought into production, signalling the start of freestanding appliances. Linoleum flooring is popular and rugs start to be added as additional decor.

At a time when the world was still recovering from the turmoil of the First World War, unaware of the horrors of the Second World War that were to come, there was no respite from hardships as the Great Depression dominated the decade. People were in need of a lift, so took pride in introducing colour and injecting brightness into their homes. Patterned laminate worktops, with coordinating splashbacks, become a popular feature at this budget conscious time. Kitchen appliances continue to advance, with storage being installed into fridge doors for the first time.

Pride in kitchen appearance continues to flourish, with china and plants displayed in open cabinets as a decorative feature for all to admire. The key trend of the era was found in two-toned kitchens, with newly launched built-in cabinets providing comprehensive storage. The very first integrated wall oven emerged (invented by leading manufacturer Thermador in 1947), which still dominates kitchens today. 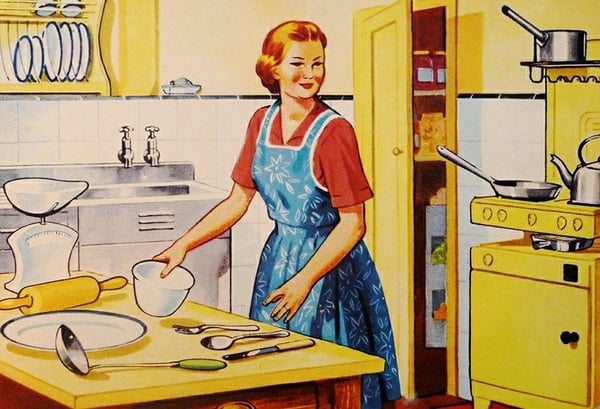 As lifestyles change, the overall house layout changes, with the kitchen being brought forward to the front of the house to a more sociable location closer to the living room. Kitchens became the hub of the home, with peninsulas being added as a feature to create a more dynamic and sociable layout.

The bright, eclectic look of the roaring fifties is very evident in kitchen design, with pastel appliances hugely popular (especially pale pink, baby blue and mint green), along with bold floral wallpaper and soft furnishings. Advancements are made in small appliances, with the creation of toasters, hand mixers, and even ice cream makers.

In a rapidly evolving world, with post-war women feeling empowered and becoming an increasing proportion of the workforce, the focus of the kitchen soon another turn. There became an even greater need for time-saving appliances and revolutionary dishwashers and waste disposal units were a great blessing to those affluent enough to install them. Bright colours continue to dominate design, echoing the soulful spirit of 1960s Britain.

The ‘70s is well known for its vibrant colour palette and kitchen interiors certainly did not pass by without a bang! Brightly coloured cabinets and appliances (golden orange and lime green being particularly favourable) along with statement ceramic tiling and patterned flooring to complete the busy look. Microwave sales exceed that of gas ovens for the first time, emphasising the changing function of the kitchen and lifestyles of those using it. Another major development took place this decade which still dominates popular layouts today, with the launch of kitchen islands.

Kitchens expand further in size and oak cabinets and floors become the material choice of the decade. Sales of cookbooks flourish and so shelving space is increased to accommodate these. Design choice funnelled homeowners into one of two categories - country charm or ultra-modern. The end of the decade is revolutionised by the emergence of quartz, pioneered by industry leader Caesarstone (who remain leading design innovators in this sphere more than three decades later!)

Increasingly used as an entertaining space, kitchens continue to grow, with newfound open-plan living combining kitchen and dining spaces. With this peninsulas and islands became an increasingly popular choice for incorporating this social priority into the scheme. Durable stainless steel dominates the manufacturing of appliances, pans and cutlery, flipping desired touches from dated white to a modern metallic finish.

As cabinets, walls and flooring become increasingly neutral, the indulgence in luxury worktops begins, with quality stone tops made from the likes of granite and marble surfaces, or quartz (a proven reliable substitute). Technology advances further and kitchen gadgets go to the next level, with bread makers and food processors becoming more intuitive than ever before. 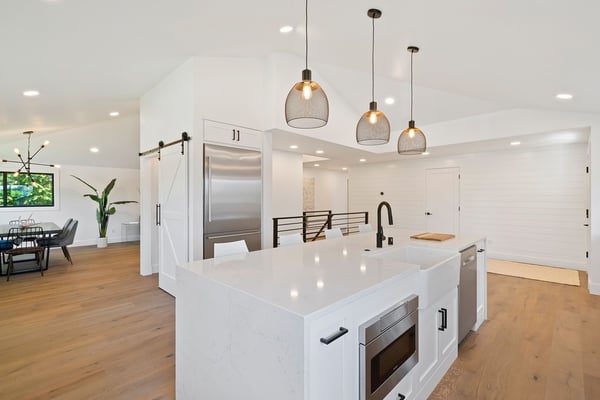 Continuing the interest up from the worktop, splashbacks and dominant cooker hoods become a design feature as well as a functional property of the kitchen. Innovation in design of worktops evolves further, with interpretations of marble, granite and concrete available in quartz from the first time. Open plan living advances further, with kitchens opening out to the garden via bi-fold doors and walls being eradicated completely from the downstairs of the home to fully embrace family living.

After a whistle-stop tour of a decade of kitchen design, we’ve reached the kitchen as we know it. Explore the trends forecast for 2020 and take a look into the future for an insight into how the kitchen may continue to evolve.

Looking for inspiration for your kitchen renovation? Download our eBook ‘How to design a kitchen: The ultimate guide’.

Caesarstone is a manufacturer of quality quartz worktops and surfaces for a range of applications such as kitchen worktops, bathroom vanities and counters, and custom solutions for home and commercial interiors. Available world wide, Caesarstone is the professional choice for interior design ideas and beautiful, durable quartz worktops and surfaces.